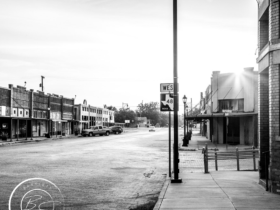 Bartlett is ﬁlled with Murals. They are scattered throughout downtown. The recently restored Coca-Cola mural, The Alamo Hotel mural, and my favorite – the Wrigley’s mural! Several others are tucked away in the alleys and in what is now the patio of cute townhome buildings in central Bartlett. I wonder how many have been painted over and are now gone forever?

In the early 1900s, painted murals were the height of advertising trends. Murals were painted on the exterior walls of large buildings to advertise long ago famous brands. It almost makes sense that these walls were chosen as advertising mediums – they were grand and dramatic, and frankly, it was cheap to hire an artist to paint slogans and images that could be seen far and wide by shoppers and travelers. Using the walls of buildings in the early 1900s gave shopkeepers and brands the biggest bang for their buck.

And how lucky we are to be able to enjoy these murals today. To stand under a huge advertisement and wonder what life was like ‘back then’ or remember with fondness a brand that has long since ceased to exist. Today’s vinyl signs and wallpaper-like billboards are just a fleeting moment and then gone again. Nothing to preserve for our future generations to one day discover and wonder. Painting on bricks meant the artwork from the early 1900s stood the test of time and lasted over 100 years! These murals were painted until 1965 when LBJ signed the Highway Beautiﬁcation Act, which impacted outdoor advertising.

Until recently, I thought that all the murals in Bartlett were exposed. But, much like the hidden Bull Durham mural inside the building at 234 E Clark, (next door to Gerbash Wacker) discovered in the 1980s when a ﬁlm crew wanted a brick exposed wall for their café scene, there is another secret mural that has been hidden away all these years. You’ve probably walked past it and not known that a little piece of history was lurking behind the brittle plaster.

The historic mural was discovered during recent renovations in the Major Roome’s Emporium at 221 E Clark in Downtown Bartlett. The stucco was carefully removed to expose a General Arthur Cigar advertisement.

We know that the large murals were often intended to help mobilize during the war. After the war, during peacetime, the murals were usually centered on the idea of improving life. The General Arthur Cigar ad in Bartlett, like many of these old General Arthur ads, ends with the statement “suits all mankind.” This is a peaceful thought; A marketing strategy to make the purchaser feel connected to his brotherhood.

Sign painters have faded as an art form, as has much of their work. But we get to catch a glimpse of the neglected remnants of the painted age through these ghost murals that have recently been discovered hidden from time.

If I see you peeking through the window of the old Major Roome’s Emporium in Downtown Bartlett, I’ll know you are looking for that little piece of history too!