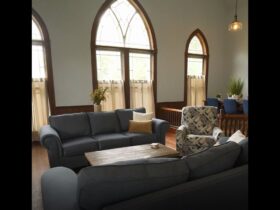 Walking down the brick streets in downtown Bartlett holds a certain charm, a mystique. The beauty of the bricks, the history of the buildings, the feeling of being swallowed up by time. It’s almost as if you’ve stepped back to the early 1900s.

One can almost feel the warm breeze of 1916 blowing by and imagine walking down the bustling street in a large formal gown with all the fixings a lady of that time would wear, complete with lace-up boots and a hat. Gentlemen of the day would be fully dressed in a smart suit and coat with a top hat.  Prior to 1916, one would walk through Bartlett on dirt streets.  The streets would wash out after the rain in the spring and be filled with ruts from horse and buggy tracks. Our predecessors would walk down the street in their fancy frocks and suits with their boots covered in mud on a day after a good rain.  Not just a little mud, but the kind of mud that would grip your shoes and hold on, making it difficult to walk as their shoes became heavier and heavier with every step.  The poor ladies would spend hours cleaning mud from all their clothes after a visit to town.  And just to think – there were no automatic washing machines in the early 1900s!

Mr. Mordeccai Levi of Charleston SC patented this idea of brick-paved streets in 1889.  The idea was popular and spread quickly.  Brick paved streets came to Bartlett in what is widely thought to be 1916.  Each one of those bricks was hand-laid by the paving crew of the day. The National Register of Historic Places Nomination Submission Form notes: The red brick paving on E Clark Street is a significant element of the district visually linking the predominantly red masonry construction on either side of the street.  The paving is typical of the type of street surface employed in Texas during the first two decades of this (20th) century.

You may not realize that the bricks from downtown carry on and go all the way down Clark Street to the dead-end at 487/Harold Clark Rd.  If you pay close attention, you can see through the spots where the modern-day asphalt is wearing thin or has chipped away, and you can see the historic brick underneath.  The visible brick is especially true close to the railroad tracks, near the old lumber yard, and City Hall.   The original historic bricks are hidden beneath the asphalt that was poured to create a smoother road surface.

It seems the Victorian street builders may have been onto something good.  Why in the world would we have stopped using bricks and started to pave streets in asphalt?  I know, I know.  I can hear each of you stating matter-of-factly: Bricks are expensive, and asphalt is cheap!  You are all correct.  However, asphalt breaks up so quickly and must be replaced at least every 15 years.  Bricks have at least a 100-year life span.  Most of the bricks in the street in Downtown Bartlett are lying right where the bricklayers of 1916 put them 105 years ago!  If they had paved that road in asphalt in 1916, it would have been torn out and replaced at least seven times over, if not more.  Not to mention, brick streets are beautiful and quaint and take us back in time.

So take a stroll through downtown Bartlett on the bricks this week and imagine what it was like to live in Victorian Bartlett.  Be thankful you aren’t dressed in your top hat and coat or full frilly dress in this heat!  Think about the beauty those Victorian street pavers left for us, and be thankful that you get to live in such an amazing place – I’ll see you there!