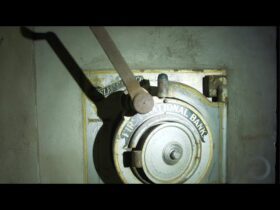 A History of Gold: The Bartlett, TX Cannonball Safe

Bartlett is known as “The best little town in Texas.”  It is located 24 miles south of Temple and 50 miles northeast of downtown Austin. The city of Bartlett is located between two counties (Bell and Williamson). The Williamson and Bell County Line runs through Clark Street downtown.  Every small town has a story. The History of Bartlett, Texas, is one of significance, unique charm, and a friendly community.

Bartlett became inhabited by settlers as early as the 1830s, well before the area was named.  In 1873 a businessman named J.E. Pietzsch (pronounced “peach”) arrived in the area and bought several acres of land.  Captain John T. Bartlett soon followed and arrived in 1877. He purchased a large amount of land next to Pietzsch.  Four years later, the Missouri-Kansas-Texas Railroad, also known as “The Katy” Railroad, surveyed the area for its rails.  The railroad wanted to lay its tracks right through Bartlett and Pietzch’s land.  Captain Bartlett donated the legal right of passage across his land to the railway company. Soon after, Pietzsch did the same with his land. A gentlemen’s agreement was reached. The town would be named for Bartlett, and all of the streets would be named after Pietsch and his family.

When the railroad reached the town in 1882, a small community had formed near the tracks. There were two stores and the Bartlett post office.

From 1884 to the early 1900s, Bartlett’s population continued to grow, and the town began to prosper.  Bartlett sits on highly fertile soil that was like jet fuel for the cotton and corn crops.  The production of crops and access to the rails made the town well-known as a shipping center in central Texas. In 1890 Bartlett became incorporated by Texas and received its charter as a municipality. By this time Bartlett had two weekly newspapers, a Masonic lodge, and a water supply.  The city also established a local bank in 1904, the Bartlett National Bank.

The Bartlett-Florence Railway Company was hired to build a twenty-three-mile track from Bartlett to Florence in 1909. Florence was the next town over and had multiple cotton gins. The locals knew this short-line rail was a business scheme for non-county residents. They planned to profit from moving large amounts of cotton from central Texas through The Katy rail. However, farmers and residents along the line were so thrilled at the idea of catching a ride between the towns the scuttle was short-lived.  To the residents’ dismay, the Bartlett-Florence Rail encountered financial problems in 1911 and foreclosed before finishing the track.

Later that same year, the Bartlett Western Railway completed the line all the way to Florence.  In December 1911, over 250 folks paid $1 for a round trip ticket from Bartlett to Florence.  They adorned their Sunday best, hopped on the train, and enjoyed a daylong celebration!

The Bartlett Western experienced financial difficulties due to the decline of cotton production and the Great Depression and stopped running in 1935.

Bartlett at its Peak

Things were going quite well for this central Texas town by 1914. Bartlett was the main shipping point in central Texas for livestock, produce, and crops. The city had grown to a population of 2,200 residents. It now had three banks, electric lighting, three cotton gins, and over thirty thriving businesses. The main drag down Clark Street was booming, and life felt pretty good.

In the 1920s, the cotton industry declined as the boll weevil spread across Texas. Bartlett was so heavily dependent on cotton. The drop in the price of the cash crop hit hard.  In 1931 the town was holding on with a substantial community of 1,873 people, and the majority of businesses remained open. However, as the Great Depression loomed, Bartlett began to feel the effects. Eventually, businesses boarded up, and folks moved away.

In some ways, Bartlett is the epitome of small towns in Texas.  Many faded away in the 1930s, unable to withstand the country’s economic decline. And unable to recover from the collapse in the price of farm commodities.

Many of Bartlett’s architecturally significant buildings remained upright and in decent condition over the last century.  Visitors will step back in time when they stroll along Clark Street. The beautiful early 20th-century buildings face a wide street paved in hand-lain red bricks. The two-block row of ornate storefronts reflect the town’s prosperity from its day.

This multi-block area is the Bartlett Historic District listed on the National Register of Historic Places.  Thirty buildings in this district contribute to the historical and architectural integrity of the area.  These buildings tell the story of this beautiful town’s past and present.

The picturesque town of Bartlett unveils hidden gems as the old buildings get carefully renovated. They tell beautiful stories as they get artfully restored.  Bartlett is a must-see destination for a glimpse of Texas history. It’s a reminder of a simpler time filled with innovation, hard work, and hope!

It’s important to preserve significant pieces of history that illustrate where we’ve been and how we got there. There is so much history in this unique Texas town!