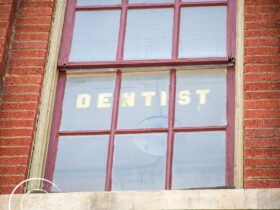 The Bartlett Grammar School is centered on an entire city block. The unique 16-sided red brick building is a testament to the creativity of Austin architect A.O. Watson. By the same token, the grand building itself, with ten classrooms, three offices, and an auditorium, is a testament to Bartlett’s prosperity in the early 1900s.

The old school building was picked up and moved out of the way. This allowed classes to continue as construction began on the new school building.  The new school opened in September 1909 for 250 students, serving 1st through 11th-grade students.  However, due to Bartlett’s expanding student enrollment by 1917, the space could only hold classes for grammar school grades 1st through 6th.  It was then that the structure became Bartlett Grammar School and remained as such until 1966.  By 1966 the 10-room school that once seemed so lavish and grand only had enough room for primary grades, kindergarten through 2nd.

After 79 years of academic steadiness, the big red school could not make the grade, and it closed its doors permanently in 1988.   The building sat abandoned for several years after 1988. While many folks wanted the building to be torn down, the Bartlett ‘Save our School’ group had different plans.

In 1990 the Bartlett school board had the task of determining what to do with the old, dilapidated building.  James Persky, author of ‘History of Bartlett City Schools,’ became determined to keep the wrecking ball away from such a magnificent historical piece of art.  In the hope that he could save the building, he called the Bartlett Area Historical Society president Bobby Hill, who also happened to be the Mayor of Bartlett at the time. Persky’s idea was to ask the general public for donations to restore the structure and keep it intact.

James Persky gave the first $1,000 contribution and wrote a letter to the editor of the Bartlett Tribune newspaper. In his letter, he pleaded to his fellow citizens in and around the area to help restore Bartlett Grammar School.  The letter worked!  Several folks began to donate funds and promote the effort to save the building!  However, the question was, who would inhabit the building once they saved it?  Finding a use post-restoration is the tricky part. An old building fundamentally designed for one purpose can be tough to repurpose.

As a result of Persky’s persistence, the town held a meeting at Bartlett Town Hall. The topic of discussion was to determine whether or not saving the building was in the best interest of their effort, money, and time.  More people attended the meeting than James Persky could have imagined, and they named themselves the “Save Our School” group.

The Alumni Association installed replicas of the original front doors and rescued the old bell tower. The first floor of the building now serves as a museum showcasing the history of Bartlett.  A sitting parlor was created from one of the classrooms on the lower level and is decorated with authentic turn-of-the-century pieces.  Today the parlor earns revenue as a host to receptions and parties. The restoration of the second story is a replica of what the school looked like in the early 1900s.  A refurbished second-grade classroom has been named in honor of long-time second-grade teacher Mrs. Jewel Cowart Ford. A portrait honoring Mrs. Ford’s service to the school and love for teaching hangs in the sitting parlor as a conversation piece.

It is essential to preserve such significant pieces of architecture and history, and there’s so much history in this unique Texas town!