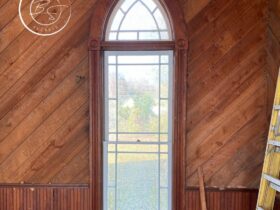 Few towns in Texas have such a rich and diverse History as Bartlett.  Nearly every storefront was vacant not long ago, earning the lonely place a reputation as a ghost town. However, Bartlett has much more to offer than a few spirits wandering around.  From being the first town in Texas with electricity to foiled bank robberies to tragedies and corruption to being a movie set and the most photographed town in Texas, Bartlett’s story is much more than what meets the eye!  The Original Bartlett Secrets Walking Tour will provide fascinating stories that would all be forgotten if the town were left to fade away.

Here are a few things you’ll see while on the Original Bartlett Secrets Walking Tour:

Along the tour, guests will visit the two banks in town that have been abandoned since the early 1900s. They offer tales of prohibition scandals and an amusing attempted robbery!

The Historic Presbyterian Church is a designated Texas landmark. Guests will walk the site of the beautifully renovated landmark while learning about its storied history on The Original Bartlett Secrets Walking Tour.

Another stop will be the site of the first electric power plant in Texas down Clark Street and over the railroad tracks. The original Municipal Power Plant is still standing in its original location across from City Hall.

Bartlett has caught the eye of Hollywood moviemakers scouting for an empty Western-style town.  The 1998 film The Newton Boys is one of the most popular movies filmed in Bartlett.

Walking through the streets and alleys of downtown is a unique experience. Tour guests will find fading murals that offer a glimpse into the past. The brick streets of downtown offer a story of their own, as do each of the old historic buildings.

All Aboard! Bartlett’s past as a bustling railroad town is rich with stories and fascinating remnants of the past.  In the early 1900s, The Bartlett Western Railway was at the height of its operations and saw several years of great success!

The Original Bartlett Secrets Walking Tour guide, Jennifer Tucker, specializes in historic renovations. She enjoys sharing the beauty of this hidden gem on this fascinating tour that is unlike any other you’ve been on before!