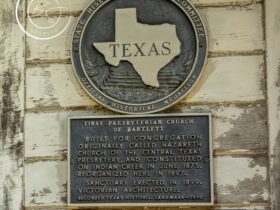 The Bartlett National Bank was organized by the town’s namesake, John T. Bartlett, and was officially established in June 1904 with $25,000 in capital.  The bank flourished alongside the town until the Great Depression battered both, and the bank closed in 1934.

Before the U.S. Mint became centralized, some banks had charters that allowed them to print their own money. Bartlett National Bank was one of the few with such a charter, adding another layer to to this town’s unique history.

Bartlett National Bank printed $1,098,040 worth of national currency in its 31 year printing period, with eight different types and denominations.  Over $1,000,000 face value is a lot of money for that time, and the currency from this bank is scarce.  However, during renovations of the bank, we found a 10 dollar bill in excellent condition!  The charter number for Bartlett National was 7317; this unique number was a specific identifier to show where the note was printed and was always depicted vertically on the bills.

In 1929 the Bartlett National Bank printed 2,060 sheets of the specific type-1 $10 national banknote found during renovations.  That amount was a typical sheet output for a national bank during that era. Each $10 bill from 1929 has a portrait of Alexander Hamilton on it and the charter number printed on either side. The dollar type-1 national banknote is the most common banknote, with over 65,000 known to exist.

The bank stood abandoned for 30 years by late 1960, and while the residents of Bartlett knew this, a band of bank robbers did not.  The robbers thought that Bartlett National Bank would be the perfect heist because it was in a small town, and there was never any foot traffic into or out of the bank during the day.  They parked their getaway car around back and stealthily crept up to get a jump on the bank employees. As soon as they burst through the doors, however, they were sorely disappointed to discover that the bank was nonoperational and had no money to steal.   The robbers moped back to their getaway car with no loot or pride to speak of in what is known as “the bank robbery that never was.”