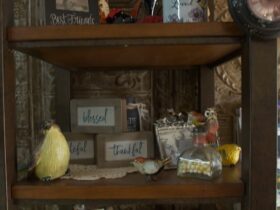 Many bright and intelligent individuals founded Bartlett, Texas – but none quite as bright and colorful as Marie Cronin.  By all accounts, she dressed in bright colors, wore bright-colored lipstick, and was a headstrong and determined influence on the early growth development of Bartlett.  Marie was the daughter of Thomas Cronin.  Mr. Cronin retired from working on two large railroads with enough money to purchase his own rail line.  He moved his family to Bartlett, Texas, and took over the troubled Bartlett Western short-line railroad with a vision of expanding the line.

In her younger years, Marie was fascinated by painting and creating various works of art. She was given the opportunity for classical training amongst the most revered artists of her time when her father sent her to Paris to study.  As the War edged closer to her in France, Marie decided to return home to Texas, but her Parisian flair and artistic presence would remain with her forever.  Following her father’s death in 1926, Marie inherited the Bartlett Western.  Being the strong-willed, headstrong world traveler, Marie Cronin was resolved that being a woman would not deter her from running a successful railroad line. She became the first female operator of a short-line railroad in Texas and America.  All reports indicate that Marie was efficient, determined, and fully capable of almost anything!  She expanded the rail line from being solely a cotton transport line into a passenger line.  The Bartlett Western was nicknamed the Bullfrog because it was known to jump the tracks, but it was still a successful boost for Bartlett and the surrounding areas.  However, the cotton industry’s decline ultimately took a toll on the rail line, and due to the decline in revenue Marie was forced to shut the BW short-line down.

Marie Cronin’s legacy survives in her artwork.  While running the rail line, she also continued to paint.  She was commissioned to paint governors and politicians, generals returning from battle, and the portrait of Joanna Troutman, the designer of the Texas state flag.  All of this work hangs in our Texas State Capitol still today.  Marie has many other works in Texas museums, including some in our own Bartlett Activities Center.  A monument dedicated to Marie Cronin will be gifted to the city of Bartlett to celebrate the remarkable legacy that she left.  The memorial will tie in her work on the railroad, her art, and all the colors with which she graced Bartlett.  Hopefully, the monument will be placed near the railroad tracks as a tourist attraction and a reminder to those who work and live in Bartlett that we are following in the footsteps of great folks by continuing to do great things.