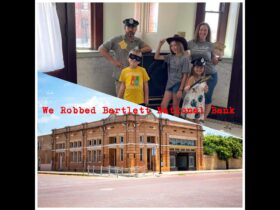 Night Watchman Irvin reports seeing a flash and hearing an explosion according to the report in the Bartlett Tribune of July 26, 1925. In this report is a very colorful accounting of fire alarms, blazing fires, trucks from neighboring towns, glass breaking all over Bartlett, and the heroic work of the brave firemen. All thanks to the watchful eye of the night watchman.

All of the buildings on Clark Street are brick structures. Having worked on them all in 2022, with the help of an engineer, it’s been fascinating to learn that these buildings were constructed in 1900-1904 with the intention of each one standing alone – even though they each appear to be built in a row. They are each designed to collapse inwards on themselves in the event of a fire, and they are all built to withstand the test of time. This is clearly evidenced in the fact that they are proudly standing today.

The Tribune article from July of 1925 goes on to outline the damage to the buildings. Those that were subjected to the blast imploded and today remain as single story buildings. If you look at the side of the building in the alley of the German Restaurant, as an example, you can clearly see the outline of the previous second story windows that have since been bricked in.  You can also see the outline of the old staircase that used to reach to the second story, but no longer has a place to climb to so has been removed.

In the early 1900s it was customary to outline the amount of insurance a business owner had and make public the amount of loss.  At this time, the Auto Exchange had a total loss of $7500 but only partial insurance. The Dry Good business suffered a loss on his building of $6000 and goods of $30,000 – sadly, only partial insurance. The Leather and Harness Stock were reported at a loss of $1200. It’s hard to imagine values this low when compared to today’s values!

The face of Downtown Bartlett was changed forever on this fateful night. Luckily the night watchman was on duty to call the fire department with haste. This block of Downtown was damaged, but not destroyed. Four of the buildings in Downtown Bartlett are now single story buildings instead of the original two-story buildings as originally constructed. The newspaper reports ‘the estimated loss of conflagration is from $75,000- $125,000’. However, it’s clear that over 100 years later these buildings are still standing and still shouting the story of Bartlett loud and clear. In the end, there wasn’t really a loss that night, just an extra chapter in the colorful story of Bartlett, Texas.