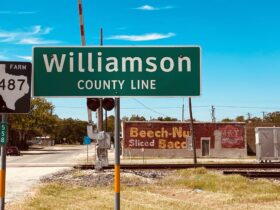 If you’ve driven past the Hollywood set on Clark Street the last few weeks, you’ve seen all the cameras and commotion.  Lights-camera-action is not a new thing for Bartlett, Texas.  Interestingly, though, how quickly we forget which movies were filmed here and who stared in which one.  Sometimes I hear citizens say, “Kings of the what?”, “What movie did that Matthew McConaughey make here?”.  Well, now there’s a new tourist attraction in town to help us remember just what films and TV shows were made right here in Bartlett, Texas.

Just over the railroad tracks in the City easement is a larger-than-life-sized poster of each movie and TV show filmed in Bartlett.  The posters feature Newton Boys, Kings of the Evening, Stars Fell on Henrietta, and the most recent film – The Lost Husband.  There are a total of 9 posters for now.  Chocolate Lizards, the movie currently being filmed in town, has not made the tribute posters line up since it has not yet been released.   But once it debuts on the big screen, I’m sure the town will add it. The purpose of the posters is to serve as an attraction for visitors to Bartlett and showcase the movie set value to visitors, passersby, and more Hollywood producers for future films!

The area near the posters has been landscaped with weed blocking material and mulch, and lantana will be planted in the Spring.  The plants chosen are intended to be evergreen and flower most of the year.  They are also low-growing and designed to add to the area’s beauty, allowing visitors to take Instagram-worthy photos where we will all be proud to see #BartlettTX tagged. The city will regularly maintain the landscaping around the posters to attract tourists to town rather than allowing the area to become an eyesore.

It’s been fun to see people driving by and stopping their cars, jumping out, and snapping a selfie with the Stars in Bartlett!  We hope to see even more of this as the word spreads and people come to see them.  Remember when people drove through Bartlett and made videos calling this a ghost town a few years back?  Not anymore – now Bartlett is THE place to be!!  Come on out to snap and share your pictures with the posters too!