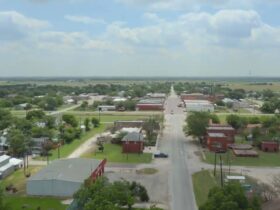 Explore Bartlett, Texas from Above

As the Teinert Memorial Library re-opens it’s a time to reflect on the original opening of the library and the benefactors who gifted the building and the library to the City of Bartlett.

During the summer of 1970, the Women’s Wednesday Club used the Bartlett National Bank at the corner of Clark and Evie streets to house the library and the volumes of donated books they had collected.  The books were moved from the old Bank building to the Teinert Memorial Library when it was opened for circulation on January 6, 1977.

The Teinert’s were married on May 24, 1911 at St John Lutheran Church.  Mr. Teinert worked for Koepke-Brown Company in Bartlett for many years and  later became employed by the St Louis Store and continued to perfect his skills until such time as he and his wife opened their own dry goods and furnishings store in Bartlett in 1924.

The store was sold in 1955, the year that Mr. Teinert died.  Alma Teinert survived her husband another 19 years and passed away in January of 1974.  The Teinert’s had been very successful in their business ventures and did not have children to leave their estate to.  Upon the death of Mrs. Teinert, the estate bequeathed a substantial amount to the City of Bartlett, which included a land grant and ultimately resulted in the construction of Teinert Memorial Library.

The library was opened in 1977 with artwork hung on the walls by local artists including Marie Cronin, O. B. Schwertner, and others.  The library was stocked with books collected by the Women’s Wednesday Club, as well as generous donations by Billy Horton who donated almost 4000 books at that time, along with notable donations from E A Limmer.

Other gifts from the Teinert family can be seen at St John’s Lutheran Church to honor their generous spirit.

In December of 2021, the Teinert Memorial Library reopened following in the same vein of generosity and donations that it opened with originally.  There are new books, new furnishings, clean shelves, restored computers, and fresh magazines!

For re-opening Day 2021,  the Women’s Wednesday Club arrived bright and early with trays of cookies for the citizens attending the opening day celebrations, the school planned events for the students to host, and the younger children attended for story hour!  It couldn’t have been a more perfect library re-opening day to honor the intent of the Teinerts and the legacy built by the Women’s Wednesday Club.

If you haven’t stopped by to check out a book or research the history of Bartlett, your local Bartlett library is open a few days a week with a friendly librarian or volunteer to help you!  The hours are posted on the City website in case the hours change to meet the needs of the citizens.